After rising to fame for his comedy and roles in films like Big Momma’s House and Barbershop, Anthony Anderson’s lifestyle was fast-paced, moving from film set to film set making a career on television and the big screen. Like many Americans, Anderson’s life was full. Between his work schedule and raising a family, there was no time to slow down and focus on his own health.

When speaking with the LA Times, Anderson stated, “I just thought I was working too hard. Being lethargic hit me first. The second wave was unquenchable thirst. The third wave was constant urination. One night I drank 5 gallons of water in an hour and a half, and that’s when I knew I had to go to the doctor.”

Symptoms like those described by Anderson are signs that the body has already developed type 2 diabetes. Recognizing the need for medical intervention early is the key to better managing diabetes and preventing illnesses from developing.

Years of stress, unhealthy eating, and a lack of regular exercise had taken its toll. At 36 years old, Anderson was diagnosed with type 2 diabetes, high cholesterol, and high blood pressure. After his diagnosis, Anderson made some small changes but didn’t truly believe that his diagnosis meant that his lifestyle needed a serious and complete overhaul.

This is all too common for those diagnosed with type 2 diabetes. There is a resistance to change their lives because they don’t feel sick. If caught early enough type-2 diabetes can regress, but drastic and immediate changes need to occur for that to take place.

His real awakening to his disease came with his father’s diagnosis, decline, and subsequent death from complications associated with type-2 diabetes. “That was a real wake-up call for me.  I didn’t want to just be a memory for my family, I wanted to be there. So, I vowed right then and there that things would be different, that I would get serious about managing my diabetes.”

Anderson started seeing a nutritionist and realized that managing his type-2 diabetes would need medication in addition to a fitness regimen and better nutrition. He needed to stick to a regimen of insulin injections and medications to ensure that his life wouldn’t mirror that of his father.

With the help of his doctor, medication, and a regimen of nutritious eating and exercise, Anderson has lost over 50 pounds and feels better than ever while remaining hopeful for a healthier future.

For an average person, this goal is not unachievable. Anderson’s regimen to improve his lifestyle was prescribed by his doctor. His perseverance in following that regimen and reaching his goal was what helped him to succeed.

Anderson’s advice? “One thing I would say is to not wait. Get real now. I’ve learned that you’re either managing your diabetes, or it’s hurting you. That’s just how diabetes works. Find your motivation and run with it.”

A type 2 diabetes diagnosis didn’t immediately change Anthony Anderson’s life. However, finding a way to push past his diagnosis and fear to find a healthier solution to his diagnosis, saved his life. We can all learn from his example and find a better and healthier path to follow, if not for our own sake, for the sake of our friends and loved ones. 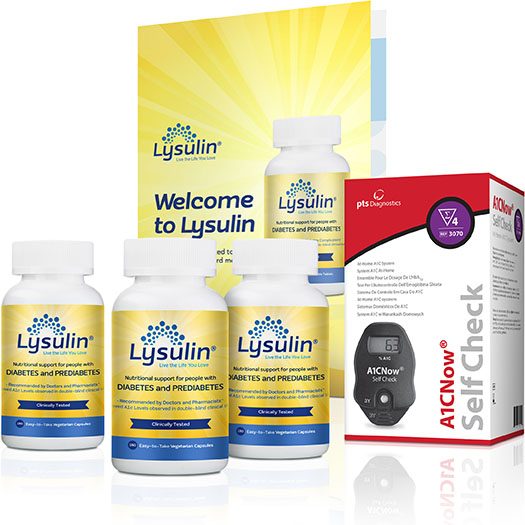 For a limited time only, get 3 months supply of Lysulin Capsules and A1CNow® SelfCheck Kit with special bundle pricing.

A1CNow® SelfCheck Kit is designed for home use and comes in a convenient 4-test pack with everything you need: a monitor, test cartridges, fingerstick lancets and blood collectors.

Return/Refunds: We don't accept any return. However, if you are unhappy with the results, we'd like to offer a full refund upon your request.
Click here to contact us for your questions and refund requests.

Disclaimers: These statements have not been evaluated by the Food and Drug Administration. This product is not intended to diagnose, treat, cure or prevent any disease. The information on this website is not intended to replace the medical advice of your doctor or healthcare provider. Please consult your healthcare provider for advice about a specific medical condition.